Picking apart firmware is quite interesting to me and so I thought it would be fun to reverse engineer my desktop’s BIOS and see what I could find.

My desktop is an HP z620 and the latest BIOS version is J61_0396.bin. Most UEFI BIOS images are a collection of modules (drivers, microcode, applications, etc…) that can be extracted and examined. The drivers and applications are PE32+ executables which is convenient as many reverse engineering tools support this executable format. We can examine/modify the BIOS image with UEFITool and pick apart the sections of interest.

An easy section to look at is where the POST logo is stored. Here it’s conveniently called “Logo” and we can extract it as a .bmp file and see it is the same logo shown during POST.

Sifting through the remaining sections, BiosDiags and AbsoluteDriver stood out as interesting as they are both applications. 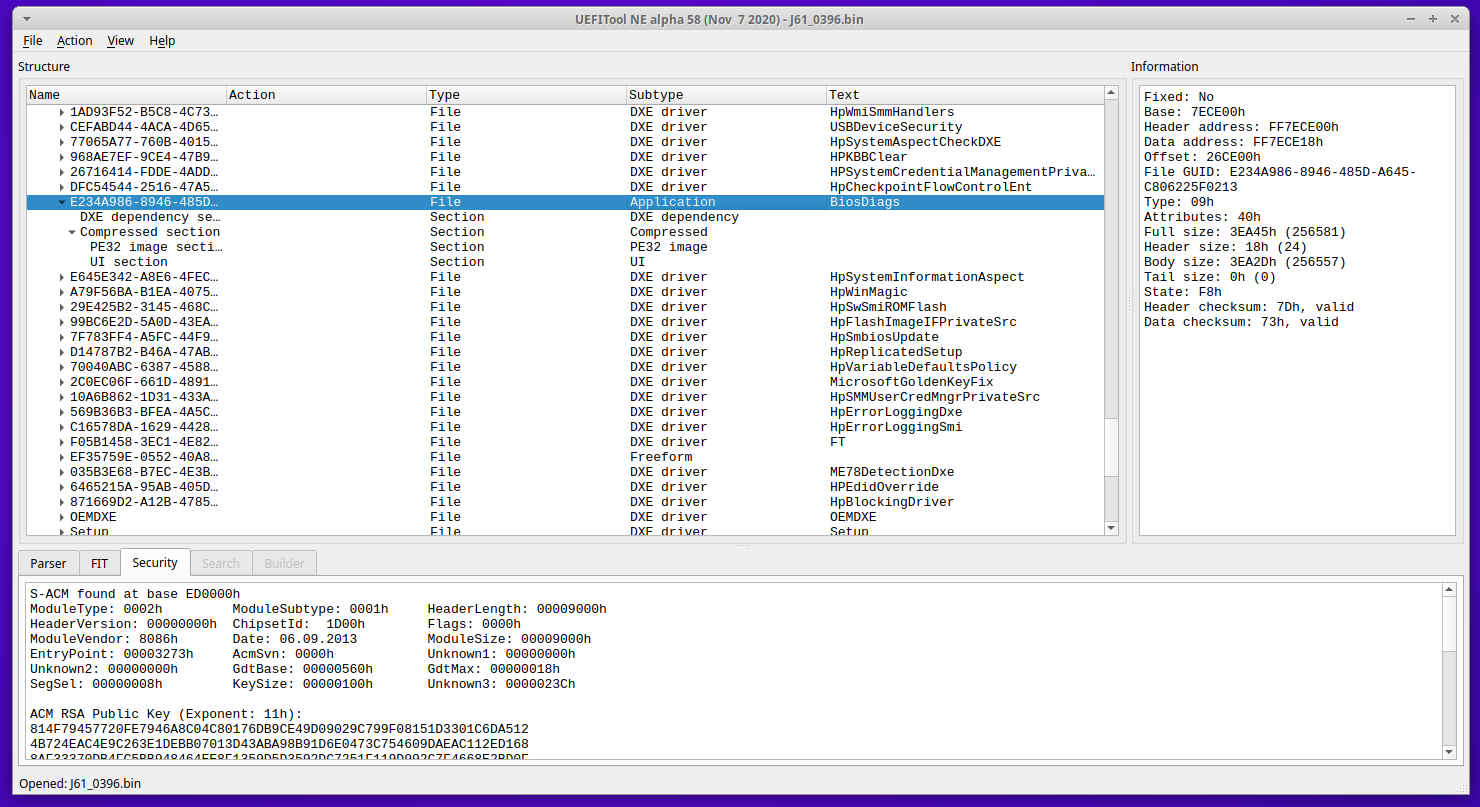 After extracting the BiosDiags section (Right-click “PE32 Image Section” -> “Extract Body”), let’s open it up in Ghidra to have a look…

Note: to help with analyzing BIOS images, the plugins ghidra-firmware-utils and efiSeek are helpful.

Looking for strings, rpcnetp.exe shows up inside shortly followed by the familiar MZ header which indicates a PE executable file. Interesting… The suspected PE executable is in the .data section of BiosDiags.efi which further raises suspicion that this is an embedded program to be dumped somewhere and not executed as part of BiosDiags.efi. 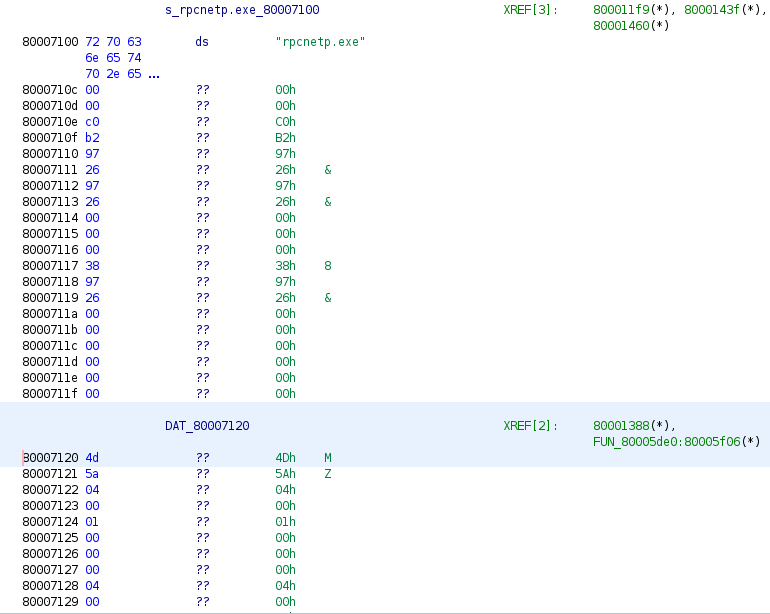 Let’s confirm our suspicions and run BiosDiags.efi in QEMU with an attached disk with Windows XP installed to see what happens.

An easy way to run EFI programs is launch QEMU with a UEFI BIOS, get a UEFI shell and invoke the program from there. Download a UEFI shell (or use this one) and build an EFI-bootable FAT32 disk.

Once QEMU starts up, you can drop into a shell and invoke BiosDiags.efi 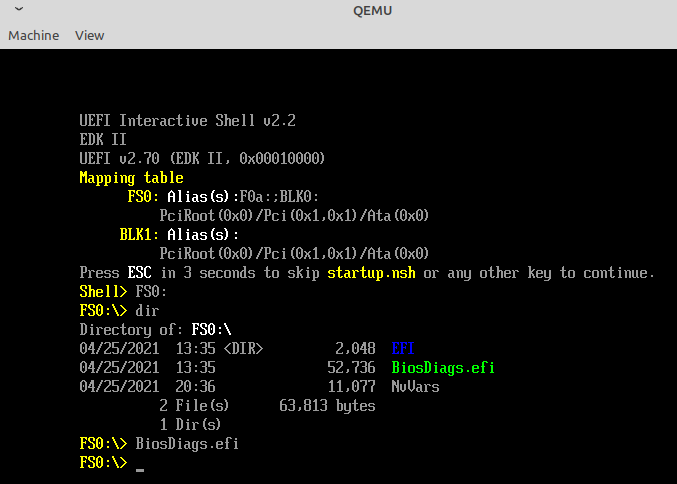 Booting up XP we can see that two new files are implanted in C:\Windows\System32\ as suspected (rpcnetp.exe and rpcnetp.dll) and rpcnetp.exe is running as SYSTEM on the machine. Nice! 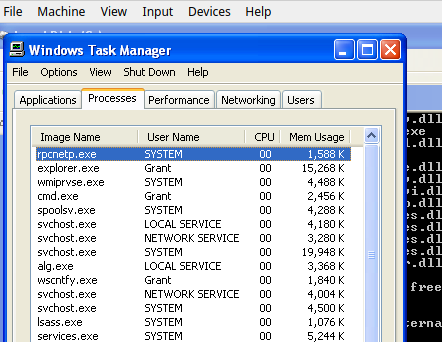 It is worth noting that trying this again on a Windows 7 machine does not produce the same results, and no rpcnet.exe is dropped.

This sort of behavior looks a lot like a bootkit but, to my surprise, Windows provides an official way to do this via the Windows Platform Binary Table (WPBT). In essence, the WPBT allows UEFI firmware to register a PE file to be run during system initialization by inserting it into an ACPI table. The ACPI table format looks like this (see above link for full details): 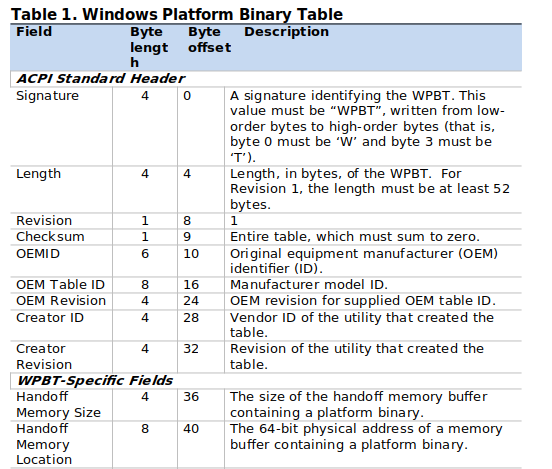 It appears as if this is exactly what is going on here. Let’s have a look. 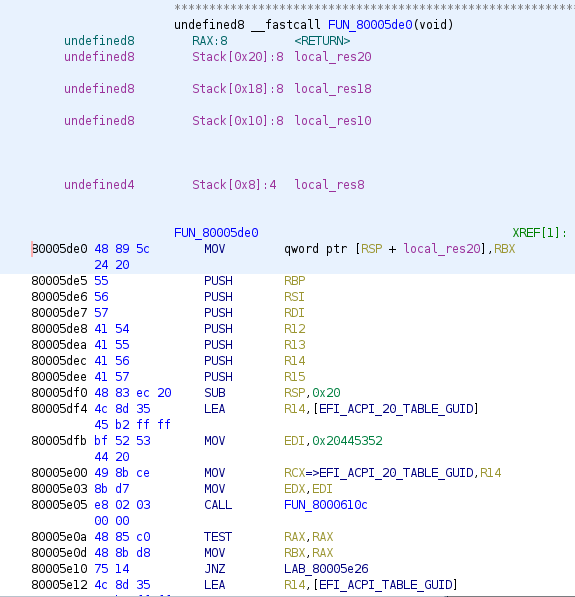 In this function, 0x80005de0, we can see it accessing some ACPI tables in the beginning.

In Microsoft’s documentation for WPBT, UEFI firmware is supposed to allocate memory for the WPBT ACPI table via the AllocatePages() service with an allocation type of AllocateAnyPages and the EfiACPIReclaimMemory flag set. This is exactly what we see later on inside 0x80005de0 :).

Lines 64 & 65 perform this allocation, with line 68 invoking a function that takes in the PE code for the dropped rpcnetp.exe file. Finally, line 69 stores the result in Table which is our ACPI table that will be used to implement WPBT.

Continuing on, we can see the WPBT fields being filled out per the specification. Line 111 sets the mandatory WPBT signature (0x54425057 translates to “WPBT”). On line 119 we can see the DAT_800010a8 value referenced again and set as the length of the PE data (puVar14 is a 32-bit variable so puVar14[9] = 4*9 -> 36). The content flag is set to 1 (indicating a PE file) and finally the memory location is set to that allocated buffer the PE data was copied into above.

Skipping over some lines, we eventually come to the end of the function where we can see the new ACPI table being installed with InstallConfigurationTable() and it’s GUID, exactly as outlined in Microsoft’s documentation.

Running both the files through Virustotal shows both files flagging 1 AV out of 67 (rpcnetp.exe rpcnetp.dll)

Digging further, it appears this program is called “Computrace” and has been around for a while. I suppose the string at the beginning of the EFI file should have alerted me to this as well…

If you’re interested, you can read more about it here from this Blackhat 14 Presentation which goes over what it does.

While it appears as if Computrace does not deploy on newer Windows installations, it is important to realize this method of stealthily dropping executables into a OS install is a very real concept and is being used. Microsoft provides a way for vendors to do this so it is highly likely other software is being installed this way as well. Although other operating systems, like Linux, don’t provide a built-in way to do this, accessing the disk in a pre-boot environment and dropping executables or modifying the guest OS is quite realistic. Since BIOS code is mostly black-box software that runs with high privilege before the OS boots, one should realize the trust we place in this firmware that we cannot control nor do we understand everything it does.