Data execution protection (DEP) and Write XOR Execute Memory are the same technique that states that regions of the executable can be marked as write or executable, but not both. From a security standpoint, you don’t want to have regions that can be written to also as marked as executable. W^X Memory acts as a prevention technique for attackers who inject shellcode into the stack and attempt to execute it.

The issue with W^X memory is that it does not prevent return-oriented programming techniques to achieve arbitrary code execution after a successful stack smashing attack. Therefore, this technique by itself is not a sufficient protection. 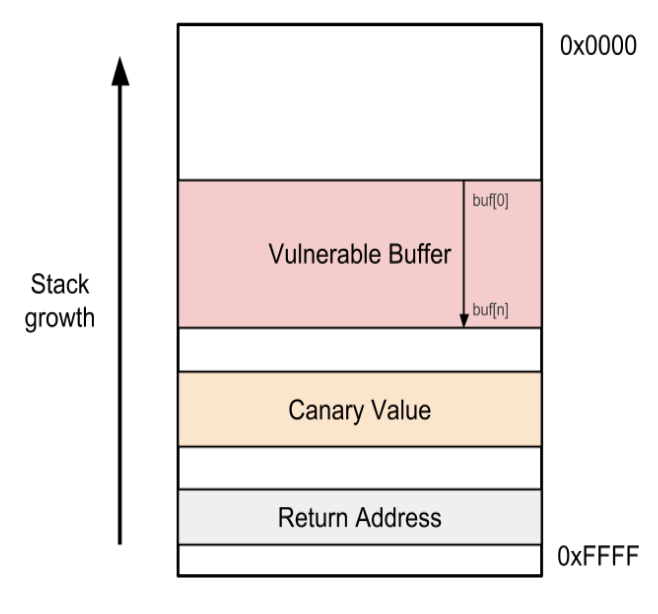 Canaries are effective if chosen to be a random value and the program itself does not have a vulnerability in which the canary value can be leaked. If this is not the case, an attacker can simply insert the proper canary (after leaking the value via a side-channel) in their exploit string in the proper location as to overflow the buffer, write the exact same canary value back, followed by the malicious return address. In addition, stack canaries introduce some additional overhead in functions due to the checking of the canary value upon the function returning. For these reasons, stack canaries are good but not entirely perfect.

In order to combat the predictable nature of memory addresses in a program, ASLR was introduced. ASLR stands for address space layout randomization, and essentially randomizes the addresses of various regions inside of an executable. Specifically, ASLR randomizes the address of the stack and heap when the program is loaded, causing significant uncertainty when performing a stacking smashing attack as the return address to which the attacker’s shellcode exists at changes every execution with high entropy. In addition to the stack being randomized, other regions such as the code and dynamic libraries section can be randomized as well. This makes assembling gadgets for a ROP attack complicated due to the shifting of addresses upon each execution.

ASLR has some weaknesses and, like stack canaries, if some sort of information leak exists in the program the addresses of the stack and heap can be leaked and used by the attacker to discover the proper return address for their shellcode. Furthermore, some programs that run in a loop without restarting can end up allowing ASLR to be brute-forced as the randomization occurs when a new process is created.

Different regions of memory on an X86 machine execute with varying levels of privileges. To denote this, the concept of ”ring versions” is used, with a lower ring indicating a higher privilege level. For example, an operating system kernel typically runs at a higher privilege level (ring 0) than a program running in user-mode inside of that operating system (ring 3). This concept is important to security as it prevents user-mode applications from reading and writing to kernel memory regions and executing privileged instructions. If this was allowed, user-mode code could escalate privileges to ring 0 or tamper with privileged memory with disastrous effects.

In order for a hypervisor to isolate and manage guest operating systems, naturally it has to be at a higher privilege level than the guests it is virtualizing. In the diagram below, you can see that hypervisors run at ring -1. This will be leveraged to protect our guest kernel from exploitation as the supervisor code is protected from the OS and has full insight into it. This sort of technique is also used for virtual machine introspection which is a more expansive way of monitoring a guest for intrusions and rootkit behavior such as IDT/SSDT hooking.

VT-x is Intel’s technology that allows an unmodified guest operating system to run directly on the CPU without emulation, while providing isolation and protection.

When VT-x is being used, there are two modes the processor can be in, root mode and non-root mode. Root mode corresponds to the privileged level the virtual machine monitor (VMM/hypervisor) is running at, and the non-root mode (non-privileged level) is what the guest operating system is executing at.

Another concern for guest isolation is direct memory access (DMA). To combat this, Intel accompanied VT-x with another technology VT-d, or IOMMU, which is another technology that prevents memory permissions from being circumvented via DMA. VT-d can be configured to restrict which memory regions can be accessed via DMA to prevent malicious behavior.

Similar to how userspace programs can execute a syscall(2) to change privilege level and invoke the kernel by trapping into it, guest operating systems can do the same to their hypervisor via a hypercall. This mechanism is used across several hypervisors such as KVM, XEN, and Hyper-V. Each hypervisor has their own set of hypercalls that they support, making the interfaces non-portable across different platforms. The corresponding X86 instruction to invoke a hypercall is VMCALL and can be invoked from the guest operating system kernel or userspace, trapping into the hypervisor when executed. In KVM, hypercalls are managed inside the function int kvm_emulate_hypercall(struct kvm_vcpu *vcpu) in the file arch/x86/kvm/x86.c. The calling convention involves placing the hypercall number inside of the EAX reg- ister. Definitions of the hypercall numbers KVM supports are contained in the header file include/uapi/linux/kvm_para.h. There are alternative methods for the guest to transmit information to the hypervisor such as memory-mapped IO (MMIO) and port-mapped IO (PIO), but we’ll stick with hypercalls due to the simplicity and ease of use.

VMENTER and VMEXIT corresponds to when the CPU switches from non-root to root mode, or in and out of the guest operating system. This can occur for many reasons besides a hypercall. Privileged instructions such as the ones outlined above in the VT-x section, as well as many other reasons, can cause a VMEXIT to the hypervisor. Since it is in the best interest of the VMM to maintain isolation of the guest, these instructions are trapped and then emulated by the the VMM. The hypervisor can also configure some of the instructions that are privileged that it wants to allow the guest operating system to execute via the VMCS fields. It is also part of the normal execution process for the VMX preemption timer to expire and fire a VMEXIT back into the VMM so that virtual machines can be scheduled. Unfortunately these VMEXIT/VMEMTER operations are costly and are similar to a context switch by the kernel when compared to user-mode binaries. When a VMEXIT occurs, the CPU has to store all of the current registers into the VMCS, as well as the reason for why the exit occurred. One benchmark at AnandTech shows that the round-trip time for a VMCALL to VMRESUME can average about 400ns on a modern processor.

In order to create a robust solution to the stack smashing problem, we will leverage the higher privilege level of a hypervisor to monitor the stack frame for overflows in select functions during kernel execution. Since the hypervisor has complete control over the guest operating system, it is able to inspect all of its memory including the stack. By instructing the protected program to notify the hypervisor of a function enter/exit, the hypervisor can inspect/record the stack after entering then validate the return address before exit. Additionally, this allows the hypervisor to not only detect that a stack smash has occurred, but also replace the proper return address on the stack and heal the program without having it crash. To do this, we will use a LLVM-pass to insert the following assembly stub before the RET instruction and immediately after the stack frame has been setup in every function.

In the above snippet, the first line loads in our custom hypercall number 0xB into the EAX register. The second line denotes that we are entering a function (this stub would go at the beginning of a function) by loading 0x1 into the EBX register. The value 0x1 would be substituted with 0x2 at the end of a function to signify the end of a call. Finally, the last line invokes the hypercall and traps into the hypervisor where we handle the request.

LLVM-passes provide the ability to register callbacks during program compilation with LLVM which allow the modification of the generated code. By registering a callback for each function in the source code, we can traverse the instructions inside and insert our stub in the proper location. In order to prevent all functions from being guarded for performance reasons, we can use an attribute that can be set on functions to be protected.

Let’s see an example of how this works given the following vulnerable C program:

Compiled to assembly, we have the following before the LLVM-pass:

After the LLVM-pass with our inserted guard code:

We can see that two stubs have been inserted at the beginning and end of the function. Prior to returning from main(), we have a check to see if the return address on the stack has been corrupted before jumping to it. At both of the VMCALL instructions, the code traps into our KVM hypercall interface and we can use various routines inside KVM to inspect the guest’s state. To read the registers, we can invoke the KVM function

To read the guest memory (such as the stack), we can call

Let’s test StackSupervisor with a simple buffer overflow bug in a very simple 32-bit kernel. We will memcpy() a large number of ‘a’s to overrun a buffer and check that StackSupervisor can detect it.

First let’s test a normal function call without an overflow:

As we can see, the return address (0x100389) is not modified. Now let’s call our function that overflows our buffer:

Looking at dmesg for StackSupervisors output, we observe that a stack corruption has occured.

This is additionally evident by QEMU crashing and we can see that the EIP register has been overwritten with ‘aaaaaaaa’.

While StackSupervisor is effective in protecting stack-based attacks, it does not protect from exploits which corrupt local variables, such as function pointers, to gain arbitrary code execution. Since an attacker could carefully overflow a buffer just enough to corrupt a function pointer but not overwrite the return address. This type of overflow would not be detected since the return address would not be overrun which is what StackSupervisor is checking.